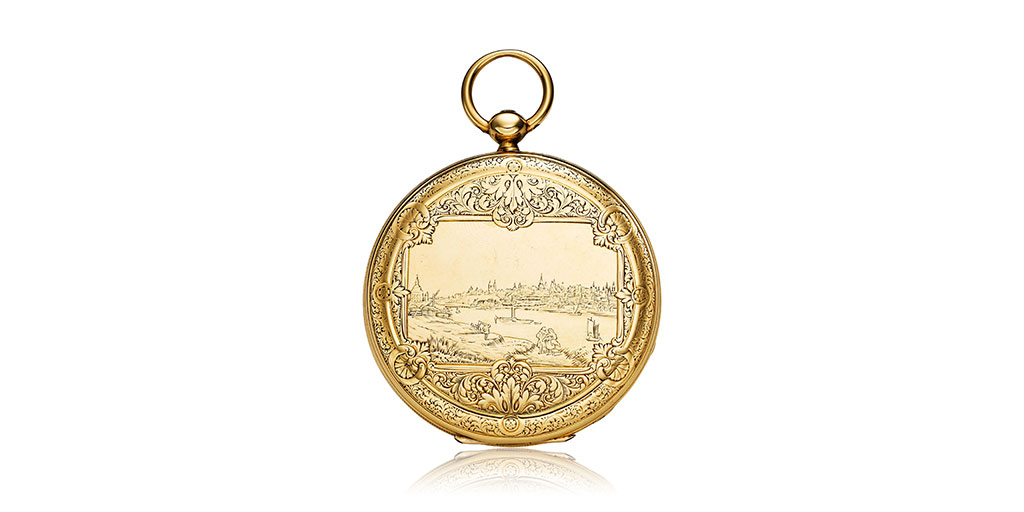 I often say that I want to keep each and every watch that I buy for Collectability. Here’s a watch that I truly hope never sells! This is the earliest Patek Philippe that I have ever owned. It is near and dear to my heart for many reasons, most importantly it was the first watch offered in my benchmark Christie’s 175 anniversary sale held at Christie’s in November 2014. This watch sold to a collector in the sale for 11,875 CHF and the gentleman sold me this watch a few weeks ago. Emotion aside, let’s discover why this watch is historically important and what it is represents for the Patek Philippe collecting community. First, let’s consider the age and era when this now 172 years old pocket watch was created. At the time that this piece was commissioned by a Polish nobleman, Antoine Norbert de Patek was just developing his newly found business. During the early days in the 1840s, Mr. Patek focused on selling to his Polish nobleman friends, and accepted special requests of engravings and presentation inscriptions such as we see here. It is highly likely that Mr. Patek personally accepted this order and hand delivered the watch to the buyer, Mr. Redziewicz. At the time of the watch’s production, the company was known as Patek & Co. The cuvette of this watch is signed Patek i Spólka, “Patek & Co.”, the signature used between 1845 and 1851. Patek hired Adrien Philippe in 1844 as technical director and Philippe was slowly implementing his keyless winding system into the young company’s production. It was not until 1851 that the company is renamed ‘Patek, Philippe & Co’. Here we have a watch from a pivotal, transitional time in the company’s history that represents Patek’s earliest client base, a special-order accommodation, and it is wound with a key. Furthermore, it is one of the first 3,000 Patek Philippe timepieces ever made. The Patek Philippe Extract from the Archives confirms production of this watch in 1847, engraved with views of Warsaw and Vilna (today the capital of Lithuania) on the covers, and an engraved coat of arms on the cuvette; and its subsequent sale on 25 July,1848. The gold cuvette is engraved with a coat of arms depicting a tied arch and inscriptions: 1848 Norbert Redziewicz, Patek i Spólka W Genewie, Nr. 2789, Wychwyt Kotficzny, Trzy Podnoszenia z Rubinów, Dziesiec Czopów w Rubinach. Cieplochron (Patek & Co. in Geneva. Lever Escapement. Three Ruby Liftings. Ten Pivots in Rubies. Heat Protection). For further historical context, please see below a brief except from Patek Philippe in America that captures the era in which this watch was made, the time that Patek watchmaking company was envisioned by its founder to be based in Poland and not Geneva!

Before founding the company in 1839, Antoine Norbert de Patek (1812-1877) was a military officer who fought for Poland’s freedom from the Russians. After three years in the military, for which he was awarded the Polish military gold cross, he settled in Geneva in 1833 for what was intended to be a brief stay. His artistic pursuits led him to study under the famous Swiss painter Alexander Calame, under whose tutelage he refined his skills as a landscape painter. As early as 1835, perhaps as a side business to fund his studies, Patek bought watch movements and cases and sold them to his Polish friends. He soon realized his relationship with the Polish aristocracy was a lucrative opportunity for him to start a watch business to service this affluent clientele.

After Patek founded the company in 1839, together with his first partner Francois Czapek, his goal was to develop a successful watchmaking company in Geneva and eventually move the watchmaking firm to Poland once the political situation in Poland was stabilized. In a letter written in 1843 from Patek to a member of the Polish royal family named Princess Czartoryska, Patek referred to his newly founded watchmaking company as Poland’s “national manufacture, where we try to gather Polish workers… to bring back to our devastated Motherland this important branch of industry.” When Czapek left the firm in 1845 due to numerous disagreements with his partner, Patek faced a challenge to continue building the company and developing new venues to sell his watches. Czapek quickly built a rival watchmaking firm that aggressively lured away many of Patek’s Polish customers, forcing Patek to look for other markets in which to sell his watches.

Jean-Adrien Philippe (1815-1894), an inventive French watchmaker, first came to Patek’s attention in Paris after Philippe won a gold medal at the French Industrial Exposition in 1844. Patek was at the fair to promote his brand while on the lookout for new ideas, and possibly a new partner. During the Paris fair, Philippe presented a new patent for a keyless stem winding and setting system that marked a great improvement over previous technologies. The new patent cleared the way for the successful production of pocket watches that enabled the wearer to wind and set the movement without a key, a system that kept the watch cleaner and more accurate. Patek saw an opportunity in partnering with Philippe and offered him a position within the firm as technical director in 1845. At the same time, Patek also took on a third partner, a lawyer named Vincent Gostkowski (1807-1884), and the company was renamed Patek & Cie. Although Philippe was a partner in 1845, it was not until 1851 that Patek & Cie.’s name was formally changed to Patek, Philippe & Cie. and both men’s names appeared on the company’s watch dials. Philippe remained with the firm as both partner and technical director until his death in 1894. Philippe’s contributions to the company represent an endless list of technical developments, patents, and innovations. With the addition of Philippe to the firm in 1845, Patek & Co. was no longer a Polish company working in Geneva. It became an international firm headed by a marketing genius, Patek, and one of the best watchmakers in the world, Philippe. The company quickly established relationships with some of the best retailers in Europe and even established business contacts in Russia, Poland’s former enemy during Patek’s time in the military.