Patek Philippe silver chronometer with Guillaume balance, Observatory Honorable Mention in 1918, made in 1913, sold in 1942 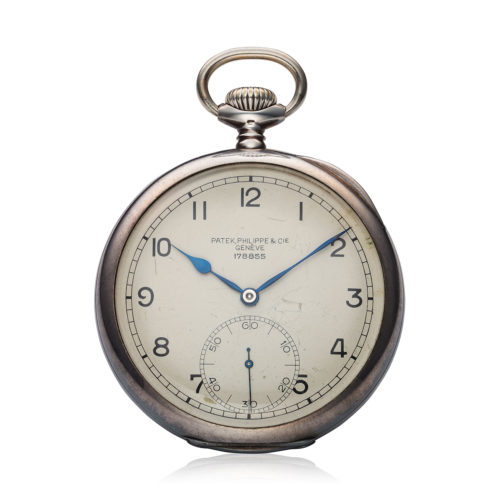 During the first half of the 20th century, the Geneva chronometer Observatory trials were considered the ultimate expression of fine watchmaking globally. Companies would spend huge amounts of time and resources to present watches for timing competitions to show who was literally the greatest producer of accurate timepieces that could perform under the harshest of conditions. Tested in numerous positions and extreme temperatures, the rigorous testing allowed the world to see who was the best-of-the-best. It was akin to Formula One car racing today. Rather than superstar drivers, the personal expression of brilliance of hand and machine was most clearly seen with the regleurs, or regulators, of the era. The escapement regulators of these chronometers were considered the superstars of the industry and the watch companies went to great lengths to recruit and retain this talent. Names such Modoux, Zibach and Batifolier are now celebrated as the horological gods that pushed timekeeping to the highest level of accuracy. It is no surprise that Patek Philippe was the King of the Geneva Observatory Trials.

The movement within this chronometer won Honorable Mention in the Geneva Observatory trials before being cased by Patek Philippe for sale in 1942. Henry Graves, Jr. and James Ward Packard were avid collectors of such observatory timekeepers. A trio of these chronometers were sold in 2017 at auction which were sold to the US Government in 1915 for use on US Army Airship Los Angeles (ZR-3). Other countries were also buying Patek Philippe chronometers as they were used as redundancy timekeeping systems for navigation. Airships, think zeppelins, typically had a trio of chronometers onboard as a redundancy and checks and balances system.

It is an interesting footnote to history that some of these chronometers were sold to different countries, the best performers appeared to have been sold to the Americans. Perhaps the Swiss were not as neutral as one might imagine.

The Guillaume balance was invented by Charles-Edouard Guillaume who won the Nobel Prize for Physics in 1920. Made of a steel and nickel alloy with anti-magnetic properties, this balance is celebrated as one of the most beautiful and accurate of the era. This watch is accompanied by a register from the Chronometer Service of the Geneva Observatory. It reveals that this chronometer received Honorable Mention in the 1918 competition with a total of 602 points. The regulator for this chronometer was Mr. J. Golay-Audemars, a regleur from multiple families of horological royalty.

Well-preserved in its massive, open face silver bassine case, this chronometer features one of the highest quality movement of the era. Every angle, every part, every screw, was hand finished to the highest standards known. The technical prowess is in full view with a Guillaume escapement, gold poising screws, and blue steel overcoil balance.

The cuvette is engraved with the German distributor and the name of the original owner is hand etched underneath as was the custom during this time. The A. Lünser company was founded by August Lünser in the 1930s. It was a watch wholesaler that used movements from various watchmakers, many that happened to be Swiss. It is unclear whether these watches were bought directly from their Swiss contacts or through intermediaries.