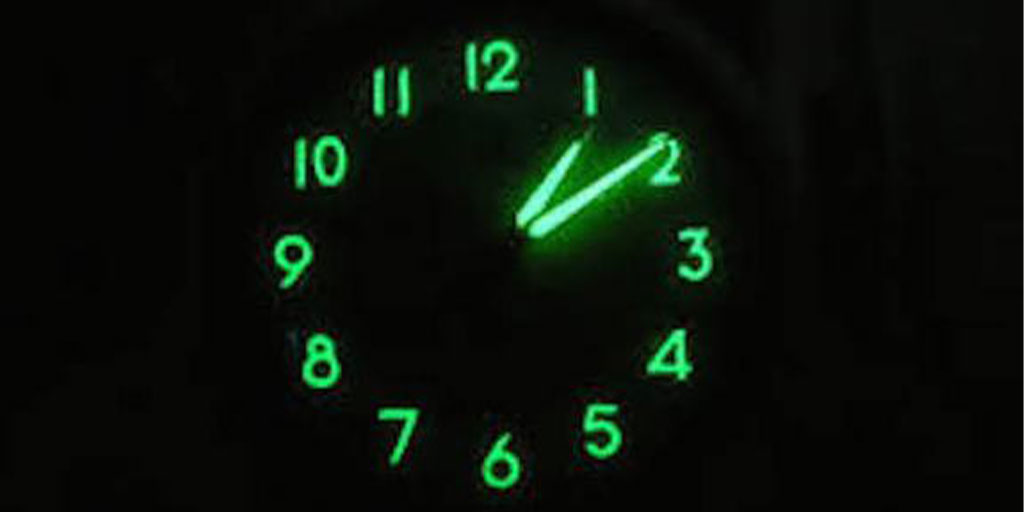 Glowing in the dark: The History of Watch Luminescence from the Early 20th Century to Today

Before the advent of electricity, trying to tell the time by reading a watch or a clock in the dark was impossible without lighting a candle. Before and throughout the 19th century, there was no practical solution for reading the time in darkness, other than the use of a minute repeater which was the privilege of a few.

To the relief of watchmakers and owners, that changed in the early 20th century with the development of luminous substances that could be applied directly on to watch dials and hands. Here, we’ll look at the evolution of luminescence in watches from the use of radium in the early 1900’s to today’s Super-LumiNova.

Marie Curie and her husband Pierre discovered radium in 1898, and quickly recognized its radioactive and luminescent properties. Radium was officially named in 1899, after a French word derived from the Latin radius, meaning ray, a fitting name for a substance that continually emits energy in the form of light. Radium has a half-life of over 1,600 years.

Watchmakers and dial makers swiftly adopted radium as a solution for reading watches in the dark. A luminous paint was developed combining radium with zinc sulfide phosphor and other trace elements, thus solving the centuries-old problem of telling the time in darkness. Luminescent paint was quickly adopted for watch dials. Luminous watches became a crucial tool in World War I, enabling soldiers on the battlefield to tell time in the dark. Luminescent paint was also used on aircraft cockpit switches, dials, and compasses, and for other industrial purposes.

Unlike today, in the early 20th century radioactive materials weren’t banned from everyday use. In fact, radium, the heaviest alkaline earth element, was used in products including toothpaste, cosmetics and even food. In the early days radium’s luminous quality was even thought to provide certain health and beauty benefits, including shiny hair.

Fortunately, radium’s glory days were soon over. The health risk of repeated exposure to radium became public knowledge when a group of women who painted radium on watch and clock dials became severely ill over time. The women used their lips to moisten the paint brushes and shape them into a fine point. Their mouths were continuously exposed to radium, and they unavoidably ingested it as well. Unfortunately, these ladies suffered dire consequences from the paint, up to and including bone cancer and death.

A famous lawsuit waged by these so-called “Radium Girls” exposed the consequences of radiation, spurring a 1925 New York Times article titled Radium Killed Woman, Relatives Declare; She Is Seventh Watch Dial Painter to Die. The group of women sued their employer, the United States Radium Corporation, for knowingly exposing them to the extremely hazardous substance. Investigations showed that while the executives and scientists at the company followed safety protocols to protect themselves, they didn’t impose the same safety standards on the painters.

In the wake of the painters’ tragedy, strong laws regulating standards for occupational health and safety were quickly adopted. Radium dial painters were required to follow strict safety protocols and provided with protective gear. Most importantly, the painters no longer licked the paintbrushes. Once painting radium dials was deemed to be a safe procedure, the production of radium dials resumed. Radium was used in watches well into the 1960’s.

How To Spot Radium in Vintage Watches

Despite radium’s centuries-long half-life, watches and clocks painted with radium experience a marked reduction of luminosity over time. This is not from the radium’s decay, which is minimal, but due to the breakdown of the zinc sulfide phosphor. Paradoxically, the radiation emitted by the radium causes the phosphorescent medium’s decay. The color fades from a bright green to a yellowish brown over time. Unless you’ve got a Geiger counter handy, the easiest way to spot a watch dial with radium is through the color of the paint on the indices and hands.

These “faded” watches haven’t lost their radioactive radium, however. It’s all there and will be for centuries to come. As long as a watch’s case is intact and its crystal is not damaged, the risk of an acute, hazardous level of exposure is relatively low. What is dangerous, though, is if the watch is opened or damaged, which allows the harmful radium gas to escape and be inhaled. If the radium touches exposed skin or is ingested, the risk is considerably higher.

In the second half of the 20th century, scientists determined that even minimal exposure to radium was a health risk. While certain beneficial medical applications of radium were continued, radium and other highly radioactive substances were banned from public use.

Watchmakers turned to another, albeit extremely weak, radioactive luminous substance called tritium to fill radium’s gap. Tritium is a hydrogen isotope that’s very slightly radioactive.  Exposure to harmful levels of radioactivity via an intact watch is impossible and tritium only poses a health threat when it is ingested. Like radium, tritium emits light on its own with no external light source needed, but its half-life is much shorter. Watches with tritium dials do lose their luminosity over time, due to tritium’s half-life of about 12 years. So-called “Cream Dial” watches painted with tritium, despite their relatively weak or non-existent glow, are highly sought after by collectors today. Despite tritium’s low health risk, it was banned from watchmaking in the 1990’s.

Lume in post-nineties watches is almost exclusively made under the brand names LumiNova and Super-LumiNova. Both substances provide high levels of luminescence and are non-radioactive. LumiNova was invented in 1993 by the Japanese firm Nemoto & Co., and quickly became the gold standard for watch luminescence. LumiNova is based on strontium aluminate, an aluminate compound.

LumiNova’s health advantages are clear, but unlike radium and tritium, its luminescence is not permanent. LumiNova must be exposed to light in order to glow in the dark. Like a rechargeable battery, it must absorb energy in order to give it off. The brightness and the duration of LumiNova’s glow depends upon the brightness and duration of its exposure to light. Even under ideal conditions, LumiNova’s glow will begin to dim after 3-5 hours.

The Future of Lume

Several sports watch brands, including Rolex and Omega, have developed their own proprietary versions of lume in recent years. The technology is sure to advance in the future, with lume that is stronger and lasts longer than current versions. Stay tuned.